skip to main | skip to sidebar

Although I'm not an immigration expert, there are a few things I know. There are lots of other things that I have learned more recently, but can't explain as well as some other people can; and there are also lots of things that I do not know. But here are just a few important, easy facts that I've seen some people forget or not know.

It's okay if you didn't know (unless you are in government or saying bad things about whole groups of people, then, well, at the least, it's important to learn).

1) Puerto Rico is a U.S. territory and its people are citizens of the United States. They don't have to do anything. They just are.

2) If someone was born in this country, that person is a citizen. They don't have to do anything. They just are.

3) If someone came into this country as a child and went through naturalization later, no one can intelligently tell them to "go back to your country", because this *is* their country. Period.

4) If someone has a "green card", that means they can live here and continue to be a part of this country legally, legitimately, for life! A "green card" (permanent residency) is permanent.They don't have to do anything. They belong here. It is their country.

5) If someone is an immigrant whose papers are not in order, it doesn't mean they started out that way, or intended it that way, or even that they know that something went amiss. They have families and they contribute to their communities.

6) Immigrants who are not citizens or permanent residents ("green card"), do not have access to welfare or food stamps, as some people think. They just don't.

7) Every single human being, without exception, is a human being and has certain rights as a human being. Full stop.
Posted by Simple Faith and Life at 9:35 PM No comments: 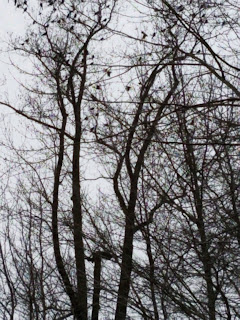 Maybe it was my dad telling me when I was a child that the first thing he did every morning was look out the window. Maybe it was spending so much time outdoors as a child, and camping a lot as an adult. Maybe it was reading The Long Winter by Laura Ingalls Wilder, reading about how a Native American man clued Pa in to the coming severe winter, based on signs he could see from the animals. Maybe it was all of that, but I've learned both to love nature and also to realize that animals often know when a storm is coming. We may know, with all our science, but so do they, it seems.

I remember some years ago, a couple days before a hurricane was predicted to hit the East Coast, we happened to take a short walk in a state park Something seemed "off", but I couldn't figure out what it was. That night, at the hotel, it dawned on me what it was. We had seen no small animals in the woods, no salamanders, no rabbits. We had heard no unseen woodland creatures rustling the leaves, no birds tweeting or calling. When we arrived home, there were no squirrels in sight, as there usually were. It seems they had all taken shelter ahead of the hurricane.

This morning, with a snowstorm predicted, and schools and government offices closed, I got up to nothing happening. I wondered if the weather forecasters had gotten it wrong.

I looked out the window to see a lone large animal in a neighbor's yard. I think it was a buck. Since moving here, I have often seen a deer family, doe and fawns, acting at home, nibbling, and then gracefully running off. But, this morning, it was a lone buck, walking, perhaps cautiously. It seemed almost as if he was taking something in or figuring something out.

A little later, I stepped outside to take a look around and heard a cacophony of birds. A whole flock was up in a tree, some joining them, some taking off, and soon they all took off in the same direction.

And then the snow began in earnest. I don't know where the birds were going, but I think they knew what was coming. 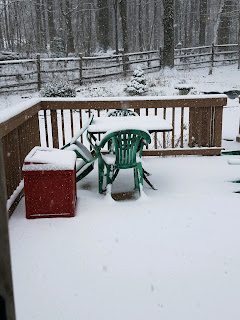 Posted by Simple Faith and Life at 10:37 AM No comments:

Love is the Only Answer

I woke this morning with a thought, and this was the thought, "Love is the only answer." It just popped into my head.

Now, what I think of when I think of "love" is respect, caring, compassion, appreciation, and understanding. I might be able to think of other words, but that's a start.

Love does not look at race, nationality, religion, or other beliefs or conditions, before being respectful of any one of the very greatest creation of all, the human being. Love seeks for all to be treated with the same respect.

Love does not look at whether someone has committed a crime to decide if they will respect that person as God's creation.

Love does not look at what they believe to be sin, and judge what is in someone else's heart. But love does call out injustice in order to right wrongs, out of compassion and respect for those being wronged. Love does not mean we will like everyone or that we won't get angry when someone commits an injustice, but love wishes change, not harm.

But I believe, when all else is said and done, that love is the only answer.
Posted by Simple Faith and Life at 7:30 AM No comments:

Please don't anyone tell me how bad people are, the people in our country or in the rest of our world. Right now, as we speak, many people in this country are working without pay to serve you and me and our loved ones. It just struck me how heroic that is. People in airline security and air traffic control are making sure people who fly are as safe as possible. People in the Coast Guard are doing water rescues. All while getting no pay and wondering when they will. All while trying to keep themselves and their own families afloat.

Don't anyone tell me how bad or evil our people are, either the people in our country or other people in our world. Sure there's sin. There has always been sin. There will always be sin. If there had not been sin, Jesus would not have come to this world. Jesus spent time with sinners, as the Pharisees pointed out disparagingly; but Jesus pointed out to them that they were sinners too. We all are. It's not people "out there" in "society", or "in other countries", that sin! It's every one of us, in some way or another. But that's not reason for despair, either for our nation, our world, or ourselves; because God is merciful.

But we do have some very real fears at times. Fears of people going homeless or hungry. Fears of sick people not getting the help they need. This is why we need compassion, compassion to look at people with eyes of faith and hope and especially love. Compassion to help them when we can and at least do them no harm. Compassion to have attitudes of love toward them.

"So faith, hope, love abide, these three; but the greatest of these is love." I Corinthians 13:13.
Posted by Simple Faith and Life at 10:30 AM No comments:

Why "Simple Faith"? Jesus said we should become as little children, and St. Therese reminded us of that, with her childlike faith. "Childlike" is not immature - not childish - but "simply trusting" in God, and in His goodness and love for us...for each and every one of us.

Why "Simple Life"? Because I strive for it, every day...not because I am "there". My life has never really been "simple", but it is my quest, and I invite you to share in my quest, as I keep striving to rest in what really matters most.

At my other blog, Simply Frugal Concepts, I focus on practical topics, such as de-cluttering, being prepared for emergencies, and cooking frugally.

If you should wish to contact me by email, my address is margmary53 at yahoo dot com.

All original content is copyright 2007-2018 by Margaret Mary Myers. If you wish to link to a post of mine, thank you. But please do not copy and re-post without explicit permission, including copying to emails. Feel free to contact me to request permission for use at margmary53 at yahoo dot com. Thank you.